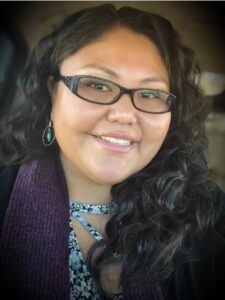 “It’s not really discussed openly,” said Greenstone, a member of the Navajo Nation and a doctoral student in Northern Arizona University’s combined school and counseling psychology program. “Family members will know about it, but they tend to not get outside support. There’s just a big gap there.”

Sheena said that means her focus is “building kinship” within the group, so that participants have a space where they feel more comfortable sharing their experiences.

“Having cultural similarities is really important,” she explained. “That shared perspective provides them with an opportunity to talk about their emotions and their thoughts on having cancer.”

CSCAZ began the program last year at the recommendation of the Tuba City Regional Health Care Center (TCRHCC). Medical professionals there suggested a support group for Native Americans with cancer would have the biggest impact in helping Native Americans, who are disproportionately impacted by chronic kidney, stomach, gallbladder, and liver cancer compared to their non-Indigenous peers. The group launched in January 2022.

Sheena is originally from Shonto, a community in Navajo County with a population of just under 500, according to the 2020 Census. After graduating with a dual degree in psychology and criminal justice from the University of Nevada Las Vegas, she returned to Shonto to be a Community Liaison at the Shonto Preparatory School. She’s also worked as an administrative assistant with the Northeast Arizona Technological Institute of Vocational Education (N.A.T.I.V.E.)  career technical education district.

When Sheena returned to school for her doctorate, one of her professors mentioned Cancer Support Community Arizona was looking for qualified facilitators of support groups, which led to the creation of the Native American support group.

“It’s been a really good experience for them and enlightening for me,” she said. “I feel there are a lot of people who don’t realize the resources that are available out there and aren’t getting support. I want to give as much as I can because there is a need.”

For those wishing to join the Native American Support Group, an individual meeting with Sheena is required beforehand. Please register for an upcoming session on the CSCAZ calendar AND contact Sheena via email at sg796@nau.edu to schedule your pre-group interview.