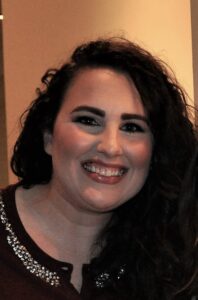 Alexandra Anastasio is the last of the Young Professionals Council “originals.”

Now 34, she was part of the first group of 20- and 30-somethings recruited to start YPC, which volunteers with CSCAZ and hosts the annual Trivia Night each year.

Among the group, Alexandra was unique in a couple of ways. In a sea of attorneys and small business owners, she was a public school teacher. She also was one of the few founding members who was a cancer survivor herself.

In 2003, while still in high school, Alexandra was diagnosed with ALL, Acute Lymphoblastic Leukemia. For two years, she underwent chemotherapy at Phoenix Children’s Hospital, completing her treatment just in time to go away to college. The disease also required a hip replacement, which was done between her freshman and sophomore years.

Alexandra says that she had a phenomenal support system during that entire time, including  her parents, two sisters, a tight-knit group of friends and her fellow students at the Catholic high school she attended.

Even with the support of friends and family, she said, it would have been helpful to have a group of peers who were also dealing with cancer. The social worker assigned to her at Phoenix Children’s Hospital was a cancer survivor and someone she could talk to, but during her entire time there, she only saw one or two other teens undergoing treatment; the rest were little kids.

“Going through treatment, I didn’t want cancer to define my life,” she said. “I realized later that it would have been nice to have someone who understood what I was going through at the time. Because even as much as my family and friends tried their absolute hardest to help, there are just some things you don’t understand until you go through them.”

So when the mother of a high school acquaintance who was serving on the CSCAZ board asked her to help start a Young Professional Council, Alexandra said yes.

The YPC’s main job is to host the annual Trivia Night fundraiser, slated this year for April 23.

“We wanted to have an event that was different from the Porch Party,” she said, referring to CSCAZ’s annual gala. “Something that would appeal to our friends and was casual and affordable.”

The group knew trivia nights were always popular and the event has proved more successful with every year. The first one raised $1,000. It is now the largest trivia night in Arizona, with last year’s virtual event bringing in $40,000.

Because of pandemic restrictions, the last two Trivia Nights have been virtual affairs and the YPC is looking forward to coming back for an in-person evening.

“For the past two years, we’ve tried to make it as fun as possible, including things like featuring a signature cocktail,” she said. “It was still successful, but the energy is just different when you hold it in person.”

Also looking forward to the event is Alexandra’s twin sister, Kathrine, part of the championship “I Drink and I Know Things” team. The name, a reference to Game of Thrones character Tyrion Lannister, is one of the many inventive aspects that the trivia teams bring to the event.

“People dress up – one year, there was a team that had a Ruth Bader Ginsberg theme,” Alexandra said. “We’ve had a group of ‘Mad Scientists’ in lab coats. People get very creative with it.”

In addition to fundraising, the YPC is looking for volunteers willing to give their time to CSCAZ’s events, particularly those for children and families. YPC members usually help out at Trunk-or-Treat during the fall and have been instrumental during past Teen Proms in spring.

For council members, there’s not only the soul-satisfying feeling of giving back to a good cause, it’s a great place for networking, she said. But it’s the satisfaction of helping out – and a past or current connection to cancer – that tends to make a good YPC member.

For Alexandra, that cancer connection is two fold. In addition to her own personal journey, her father is also a cancer survivor.

“I just love that Cancer Support Community offers programs for the whole family, and it’s not just about the person who is diagnosed,” she said. “It’s so important if you are a caregiver or for children who aren’t patients, but their parents are. With two out of five in my immediate family who are survivors, I feel that I have to give back in some way.”

CSCAZ thanks Alexandra for her continuing volunteerism and her leadership of the YPC. If you are interested in joining the young professional group, please contact Annet Ruiter at aruiter@cscaz.org.