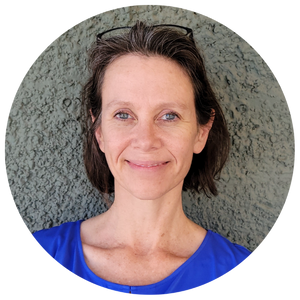 Jen Sander’s career of helping those impacted by cancer has come full circle.

Not long after she graduated from Arizona State University with a psychology degree, Jen became part of what was then known as The Wellness Community, which had just opened its doors a few years prior at 360 East Palm Lane in Phoenix.

“I think I might have been the first intern here,” she recalled. That internship transformed into a full-time position to create, implement and manage a program called “The Family Circle” to help youth cope when a family member was diagnosed with cancer.

She left after a few years to raise her son and explore other avenues in mental health. She worked with students at ASU, conducted therapy at various community organizations, and had a private practice for a time. For many years, she served as Clinical Director for the Arizona Youth and Family Services, a nonprofit providing outpatient behavioral health counseling.

But starting last month, 20 years after she first walked through the doors here, Jen has returned to East Palm Lane to be the Senior Program Director for the organization now known as Cancer Support Community Arizona.

“I always had a passion to work with people going through health issues,” she said.

It was something she could relate to on a personal level. When she was a child, Jen dreamed of a career as a professional ballet dancer, and had her sights set on going to Russia to train. But from the age of 10, she began to suffer from chronic pain and discovered that she had a rare congenital condition resulting in extra bones in her feet. She ultimately had to have surgery and was confined to a wheelchair for two years, ending her dream.

“I think my medical history got me interested in psychology,” she said. “I also had some family members with chronic illnesses, including cancer, and I wanted to learn more about how our mental state affects our ability to heal.”

In her current position at CSCAZ, Jen plays many roles. She supervises support group facilitators, but is also a facilitator herself, leading the weekly Monday support group. As the senior program director, she also oversees individuals who manage numerous programs at CSCAZ, including expressive arts, hospital navigators, Latinx services, and the Youth, Teen and Family programs.

“My job is to have a pulse on all the programming to make sure we are heading in the right direction, making these programs more robust,  and meeting the needs of the people we serve,” she said.

Jen is also in charge of overall program development and has several specific initiatives she knows CSCAZ wants to add, such as a breast cancer group in the Valley (there is already one in northern Arizona), and a short-term brief counseling program that would offer one-on-one support to people with cancer-specific needs. Another goal is to continue expanding CSCAZ’s outreach to traditionally underserved communities, reaching more people of color and potentially the LGBTQ+ community.

Finally, she wants to make sure that all who work at CSCAZ “practice what we preach” in terms of meeting their own self-care needs so they don’t burn out. There’s a saying that you can’t pour from an empty cup and it’s something Jen truly believes in.

“The cool thing about every person here is that it’s in their DNA to do right by people,” she said. “I just want to make sure they do right by themselves. I see part of my role as making sure everyone’s cup is full.”