Love to Laugh? Have Pun! Just Do Wit! 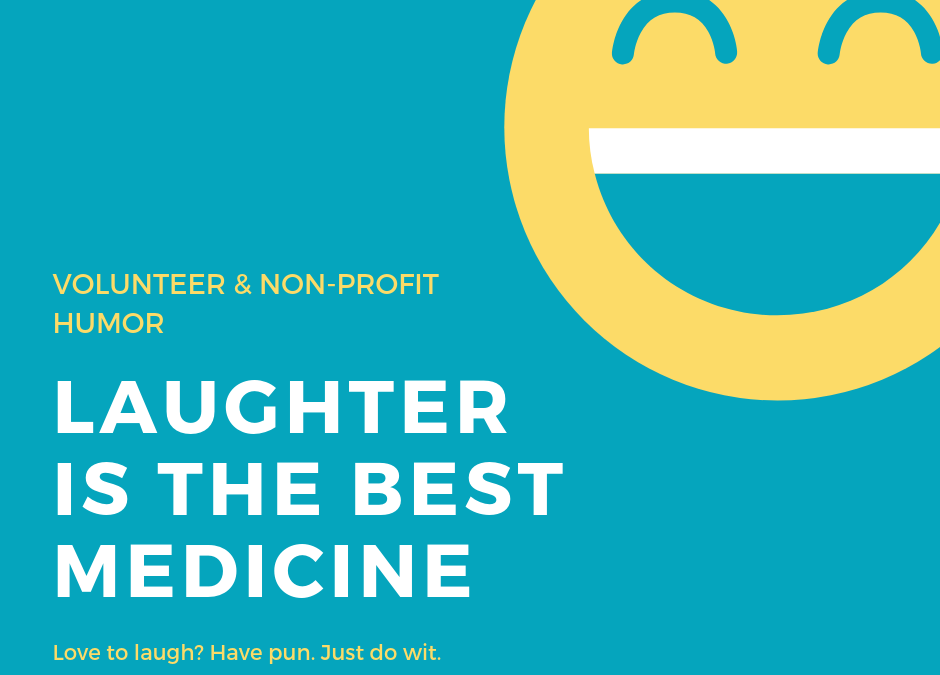 2. What do you get when you cross an Executive Director, a Director of Operations, and a Janitor? A situation that is not uncommon at most nonprofit organizations.

3. An Executive Director, a Development Director, and a board chair were adrift on a raft after their ship sank. The board chair looked at the ED and said, “This is all your fault. You were steering the boat!” The ED looked at the DD and said, “No, it’s all the DD’s fault. He oversaw the sails.” The DD said, “It’s both your fault. You were steering the boat and you were charting the course.” All three were then devoured by sharks. It was the worst board/staff retreat ever and the organization never used that team-building company again.

5. What do you call a volunteer bricklayer? A free-mason.

6. As a volunteer, I taught a seminar on how to write persuasive speeches at the local prison. I titled the course: “Prose and Cons”.

7. A local non-profit realized that it had never received a donation from the city’s most successful lawyer. So, a volunteer fundraiser paid the lawyer a visit in his lavish office. The volunteer opened the meeting by saying, ‘Our research shows that even though your annual income is over two million dollars, you don’t give a penny to charity. Wouldn’t you like to give something back to your community? The lawyer thinks for a minute and says, ‘First, did your research also show you that my mother is dying of a long painful illness, and she has huge medical bills that are far beyond her ability to pay?’ Embarrassed, the volunteer mumbles, ‘Uh… No, I didn’t know that.’ ‘Secondly,’ says the lawyer, ‘did it show that my brother, a disabled Veteran, is blind and confined to a wheelchair and is unable to support his wife and six children? The stricken volunteer begins to stammer an apology but is cut off again. ‘Thirdly, did your research also show you that my sister’s husband died in a dreadful car accident, leaving her penniless with a mortgage and three children, one of whom is disabled and another that has learning disabilities requiring an array of private tutors?’ The humiliated volunteer, completely beaten, says, ‘I’m so sorry. I had no idea. Finally the lawyer says, ‘So, if I didn’t give any money to them, what makes you think I’d give any to you?

8. A retired musician who volunteers to entertain patients in nursing homes and hospitals went to one local hospital in Brooklyn and took his portable keyboard along. He told some jokes and sang some fun and heartwarming songs at patients` bedsides. After he finished, he said, in farewell, “Thank you all for letting me entertain you tonight. I sincerely hope you all get better so you can leave.” One elderly gentleman replied in his thick Brooklyn voice, “I hope you get better, too!”

9. I do charity work. I volunteer my opinion every day.

10. I volunteer at an information desk and my job is to tell people where to go. I was born for this.

To learn more about becoming a volunteer at Cancer Support Community Arizona, contact Karl Wein, Manager of Facilities, Outreach and Volunteer at kwein@cscaz.org or (602) 712-1006.