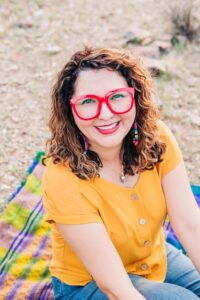 Linda Ruvalcaba, who facilitates the Multiple Myeloma Learn and Support Group, says she first became interested in psychotherapy in junior high. In the space of roughly a year, there was a series of personal and national events that shook her, she said, including the murder of Matthew Shepard, the Columbine shooting, and the divorce of her parents.

“I was interested in understanding why people do what they do,” she said, “and I was trying to understand my own feelings.”

That ultimately led to a BA in Psychology from Arizona State University, followed by an MA in Counseling from Northern Arizona University. While she was earning her degrees, she also completed internships that involved facilitating support groups. A support group she helped run at Banner Desert Medical Center introduced her to Cancer Support Community Arizona.

“During my internship in oncology, I found out about Cancer Support and I started referring people there,” she said. “I got to know and love the place and I remember thinking, ‘I want to work there some day.’”

It took almost eight years. During that time, Linda worked in community mental health, but then in 2019, decided to strike out on her own and open a private therapy practice called Therapy Girl, LLC. Not long after that, she joined CSCAZ as a facilitator.

There they discuss living with Multiple Myeloma, a cancer that forms in a type of white blood cell called a plasma cell. They learn about treatment options, side effect management, and survivorship.

Although this group recently started holding in-person sessions again, participants can also join via Zoom, which is helpful for those whose immune systems have been compromised.

Linda notes that the group is very engaged, open and welcoming to new members.

“It’s just a really kind bunch of people,” she said. “They are supportive and empathetic, and they share their knowledge and encourage people to seek out advice. They are inspiring and they give each other hope – and practical advice.”

In addition to her work with CSCAZ and her private practice, Linda also volunteers with Phoenix Allies for Community Health, which works to improve health outcomes for marginalized low-income communities of working poor with no access to primary care.

She also started a networking group for fellow Latinx therapists.

“That started because when I went into private practice, I didn’t know many colleagues who were in private practice – and the ones I knew were older and white,” she said. “I wanted to build a safe space for Latinx therapists to come together and empower one another. Plus, I arrived in Scottsdale just in time for high school, which as a Chicana was a bit of a culture shock. The networking group was also about finding a way back to my community.”